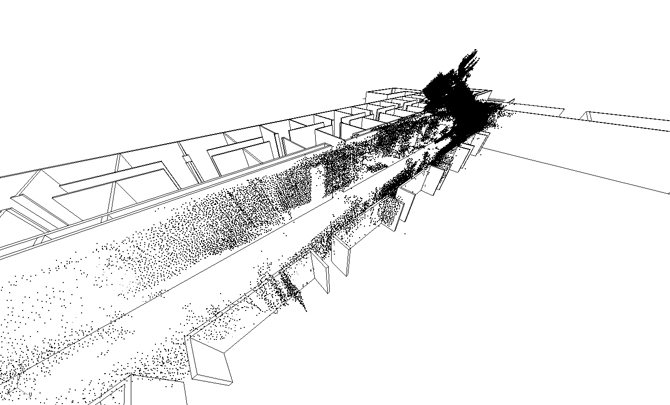 "We hold to the idea that architecture is not simply reducible to the container and the contained but that there exists a dynamic exchange between the life of matter and the matter of our lives." Reiser + Umemoto"

Points + Clouds: Tactical Hermeneutics, operates as a Research-through Tooling methodology, as an explicit vehicle that engages a critique on the discipline of architecture. This thesis is an investigation that critically assess its position within the discipline and the discourse of architecture by provoking the interrogations and explorations of environments. It consistently reiterates the condition that 'minds the gap', situated between the spatial representation and the built environment informed through a hermeneutic device. Creating the occurrence of mis-truth, errors, holes, and mistakes that formulate poetic spatial possibilities. The thesis exploits the potency of the unfamiliar and the unseen that lurks within the atmospheric construct. It is ambiguous and specific simultaneously to the slippage between spaces and realms. Defining tactics that counter the traditional thinking of spaces and volumes through the dualities of surfaces and solids versus the notion of points and clouds, the atmospheric.

Situated within the context of Architecture, the work corresponds to the specifics of the physical world as an atmospheric condition imaged virtually. It encompasses ambiguity and specificity within the modes of explorations and experimentation of an imaged space. Aiming to provoke, imitate interrogations, and explorations between blurring of the physical and the virtual environments. William Mitchell argues for the termination of the so called "trial separation phase of "bits" (the elementary unit of information) and atoms (the elementary unit of matter), which reflects on a world that is moving towards an age that is governed less and less by physical boundaries and more by the connections to information" that requires us to re-imagine, re-image, and reconstruct our environments to consider the territories that the Architect and Architecture operates within. 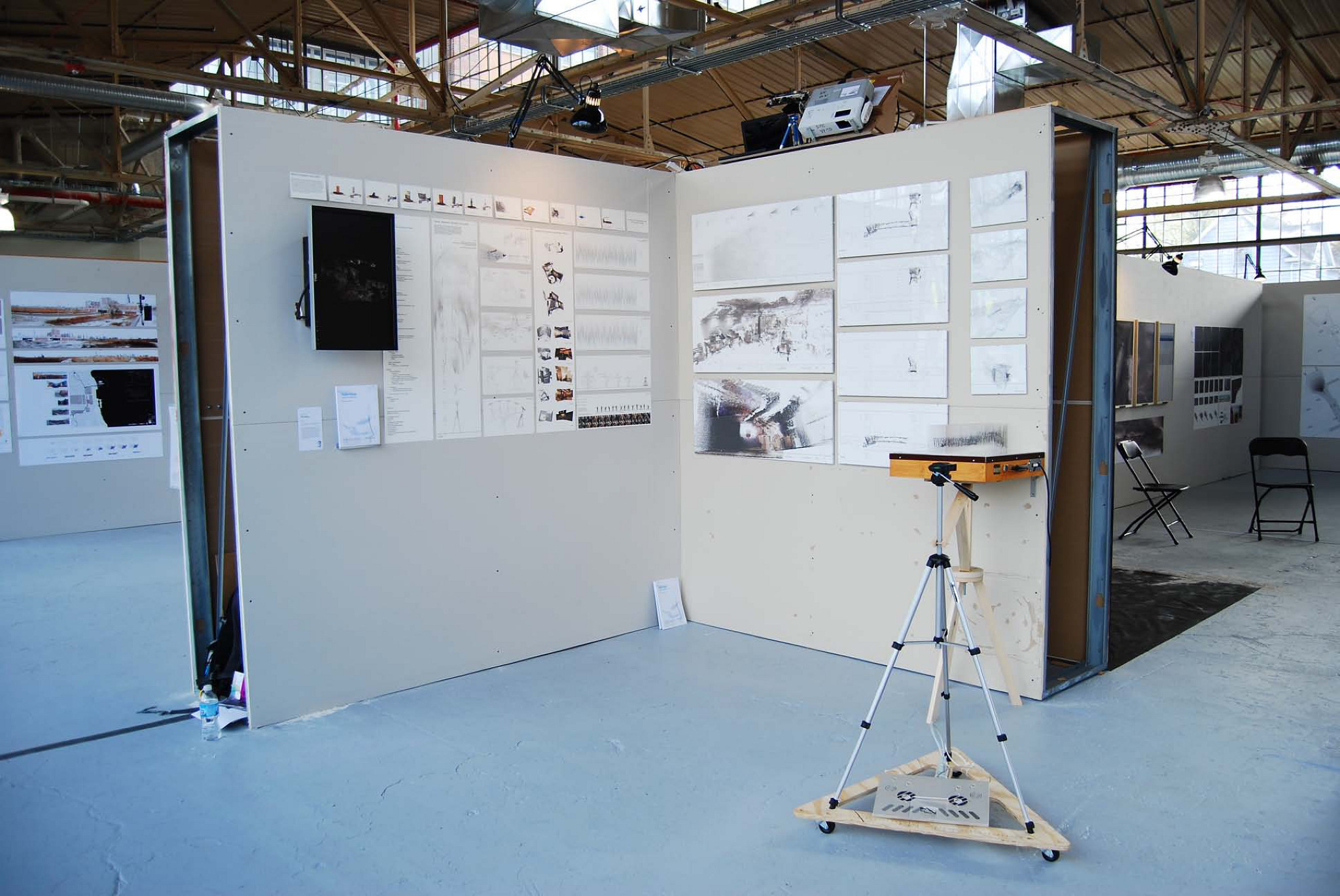 The complex history of these types of devices run tangent with the lineage of architecture, dating back to the machines of Vitruvius and Leonardo da Vinci. They act to further to construct, deconstruct, and create the built environment whether virtual or physical, real or imaginative. The project is situated within translating and transcribing traces of spatial qualities seen specifically through the sensors lens. Similar to the history of perspective drawings and architectural space, the role of translation between the drawing and the physical. The Kinect is reinterpreted as a tool of abstraction to manipulate phenomena in the same way that architecture does. The device is embedded with a RGB camera for imagery and an infra-red input and output that calculates depth and range within a space. It has the ability to record, measure, perform and alter spatial environments. The apparatus embodies the ambition of the project to expose the critique on role of drawings, imaging, copying, architecture of sensorial, and the architecture of atmospheric.

Device: an instrument or tool designed for a specific task or set of tasks, for a designed purpose.

Instruments: is a means by which something is effected or done with agency while measuring with precision (pending on resolution) of a quantity within observation.

Apparatuses: a systematic grouping of the complex array of DAIT's directed towards a specific goal and agenda.

Tools: an more general equipment used as a means of accomplishing a task. Designed less specific but utilized more in a specific means. 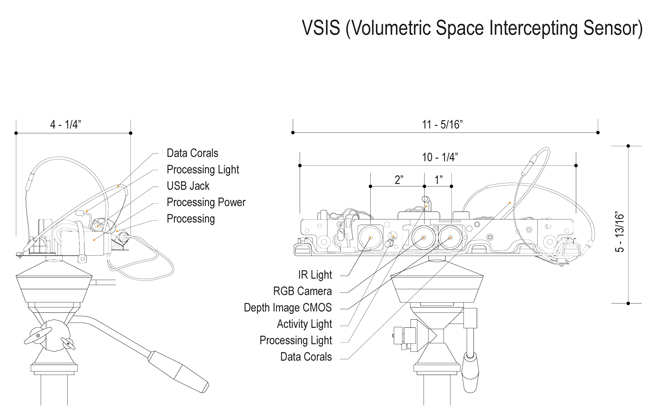 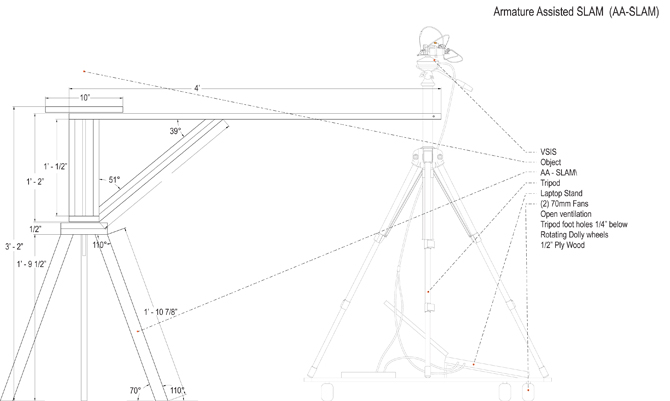 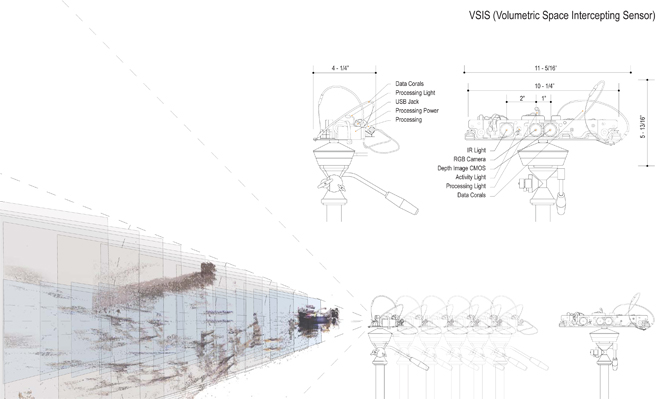 DAIT's can construct, deconstruct, measure, abstract, and re-create the built environment virtually. They are analogous constructs that reflects off themes of weather, atmosphere, clouds, spatial, portals and realities. Designing an array of apparatuses, the research is framed through the methodology surrounding the context of tooling that incorporates the gaming motion sensing input device from Microsoft. Intended for the Xbox 360 as a touch-less gaming controller, the thesis specifically seeks to hack and re-purpose the gaming device as a spatial drawing instrument for abstraction and imaging of physical spatial qualities. The nature of how the device perceives space opens new avenues and a critique on how spaces and volumes are represented, an paradigm shift with the addition of points and clouds as a mode of visualizing volume outside the norm of surfaces and solids. DAIT's is the category of work, of repurposing the sensor as a hermeneutic device, to interpret potential different realties that could and would exist coupled with assisting devices, instruments, tools, and apparatuses.

"The Light - Space Modulator can be put to use in various optical experiments, and I find it reasonable that such experiments be carried on systemically, for they lead us towards new possibilities of optical and kinetic creations." Moholy - Nagy, "Lichtrequisit einer elektrischen Bühne" 1930 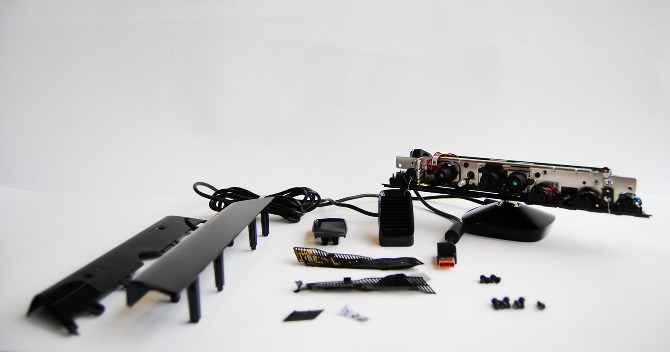 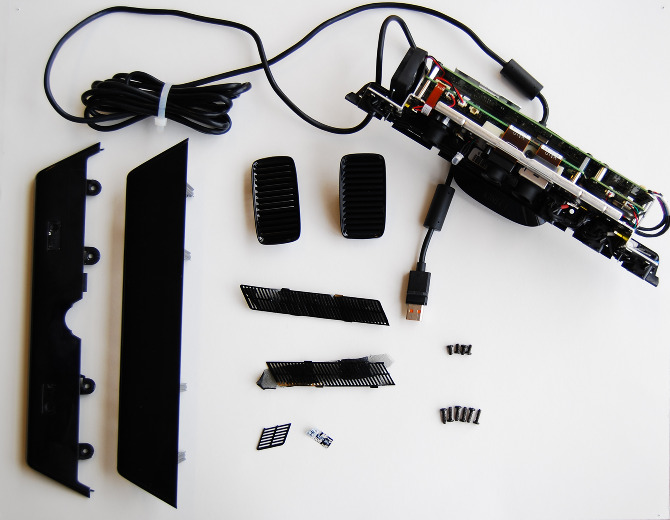 Repurposing the Microsoft Kinect sensor as a hermeneutic device, it is renamed as VSIS, short for the Volumetric Space Intercepting Sensor. Due to its repurpose function, it is fitting to have a more descriptive name of the devices specifically for the purpose of this research. The apparatuses also includes M-SLAM, mobile simultaneous localization and mapping apparatus; AA-SLAM, armature assisted simultaneous localization and mapping apparatus; and an array of tripods and computers.

“Camera: an optical device consisting of a variable size aperture, and a shutter to let in the correct amount of light, a series of lenses to focus the light, and light - sensitive film that records the image in a lightproof construct.” - CJ Lim, "Devices" 2006

Points + Clouds: Tactical Hermeneutics is broken down into a series of phases and operations that exploit the discovery of technique and strategies of implementation. Today, as modeling, representation, and fabrication technologies shift from manual to automated processes, the issue of points and clouds becomes crucial because it confronts spatial thinking embedded in design. To illustrate this, phases are designed to give order, organization and progression to the project. Phases includes spatial, material, and atmospheric research that celebrates the architectural and spatial apparatus through a mode of practice and experimentation.

This series is deployed to discover traits, interpretation, navigational properties of space and materiality, and the receptability of certain materials to infrared light emitted from the sensor. This phase of work particularly hones on discovering representation techniques to describe physical material characteristics in a point clouds system. An aggregation of clouds, similar to an array of atmospheric substances, is visualized through the tool. Research is conducted regarding the ability of the sensor to see and represent visual tangible materials, varying in the degree of surfaces, textures and material reflectivity juxtaposed within natural and atmospheric conditions. Substances being scanned and tested range from bricks, metals, mirrors, glass, wood, rocks, dust, water, steam, ice, and fire. Physical atmospheric disruptions causes certain effects to the projective scan and contribute to the controlled distorted reality. The visual representation of all “the measureable forces that may influence the work of the architect or even steer or regulate it” is an underlying foundation for the research project. 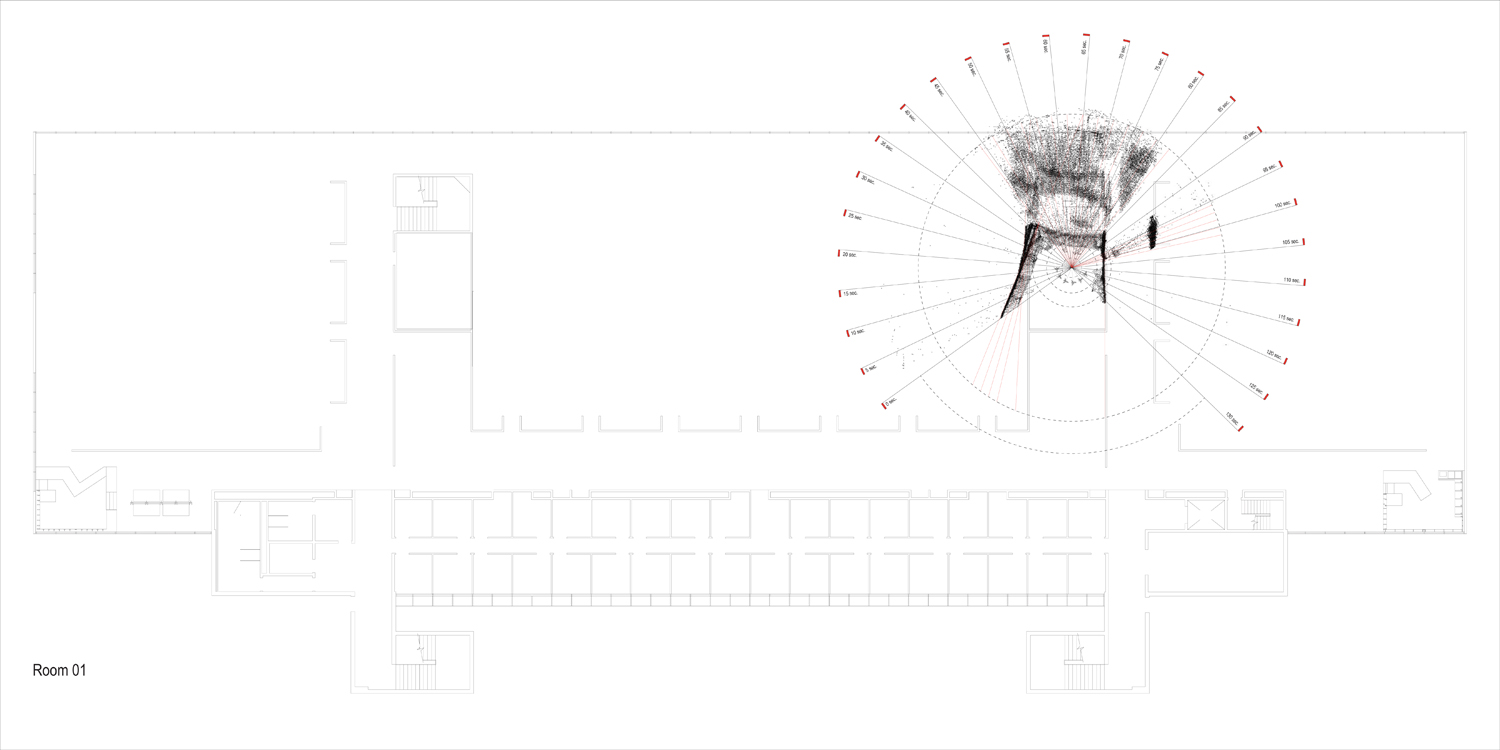 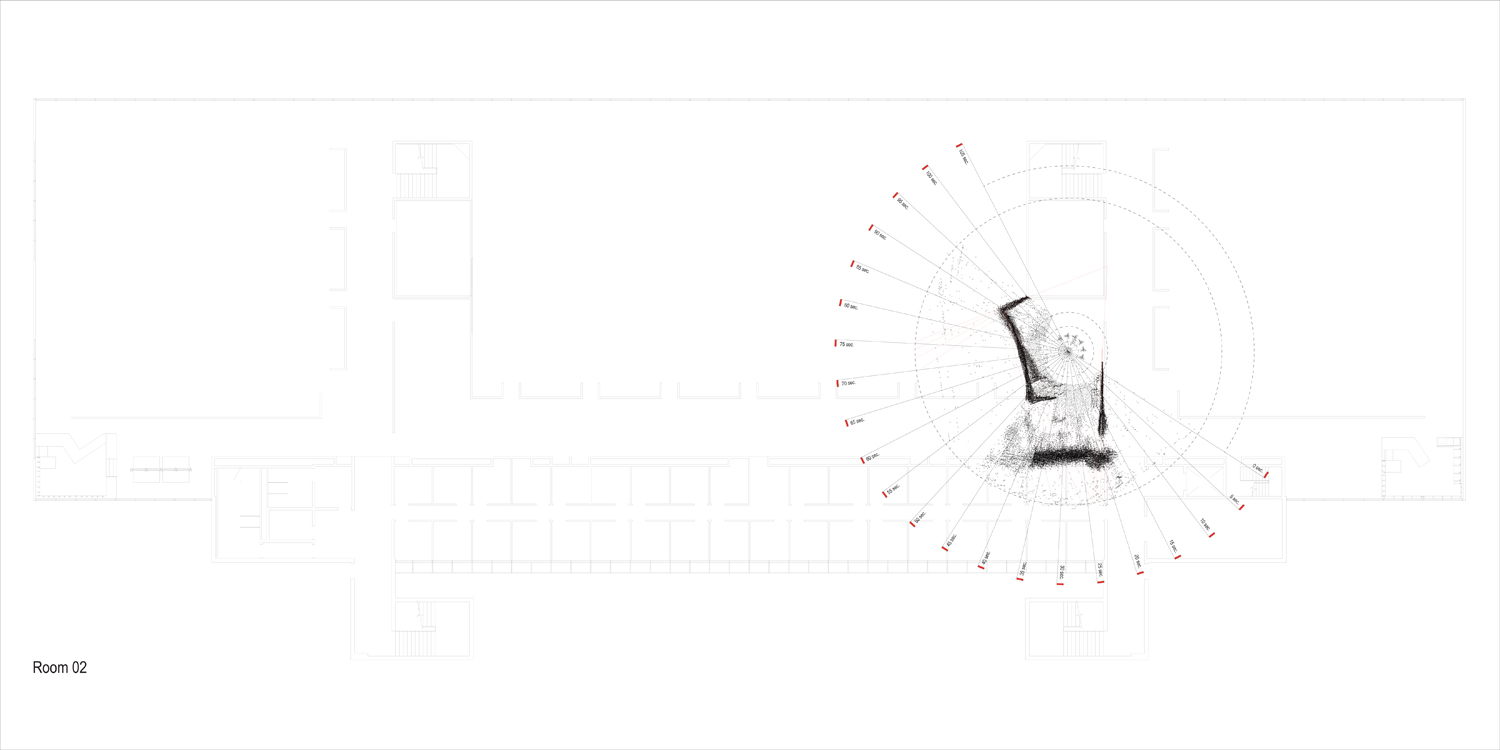 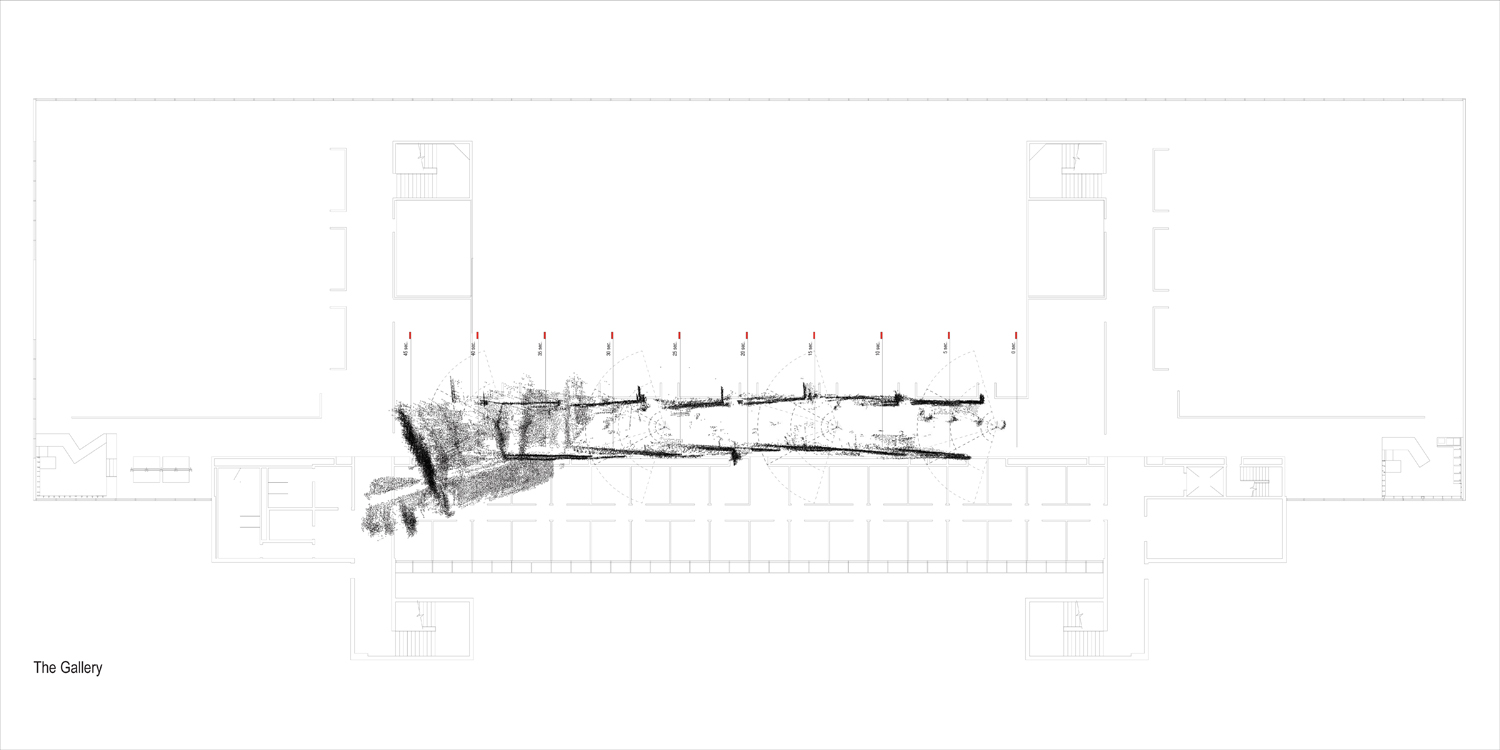 This series of work leaves the object world of MIS and enters into a phase that exploits the technology and probes into a parallel world to the physical by creating spatial analysis through a technique of spatializing point expanding coordinate system (SPECS). The work situates within the territory around the volume and the perspective of space. The phase of exploration responds to the fact that the virtual space is perceived on a computer screen, thus the question of perception is usually reduced to primarily vision, but removed from its "origin of meaning in human experience is not questioned" . The translational qualities of the scanned and the act of converting physical volumetric space into a phase change material as an entirety, is provocative, and re-links the role of the perspective back to its origins of human experience. By the nature of a phase change material, this series addresses materiality and opens up atmospheric conditions that starts to reveal certain mysteries of where and how some of the occurrences of mistruth and errors occur. SPECS is a series of representational diagrams that is a direct comparison between the digital point cloud, the photographed space, and the real space.

Chromatic Horizons, is an interpretation of the realities scanned, working with the removals and displacements that challenges architectures perspectives through a Chromatic Horizon drawing. This series of drawings directly corresponds to the Hermeneutic Series of Plan Diagrams. The works reveals a level of translations and interpretation of the space as a way to imitate design.

Interpretation of spaces, and designing around techniques but not reliant on them to design transmissible, navigational properties of space. Conceptualizing space between the dualities of surfaces and solids to a notion of points and clouds: the atmospheric, draws on the questions of authenticity and the infidelities. Producing a body of work that explores interpretation through representation of reality that is full of errors, distortions, gaps, and residue. The drawings act as markers for the next projective moments of this work. The point cloud illusion of reality sets up a new framework of design, embedded within the history of perspective and imaging, techniques of sections and sectioning the cloud evoke levels of interpretations and translations of what that space may allow or become. The research presents the ability to manipulate the "atmosphere", specifically as a design methodology in approaching a site by surveying its existing condition. 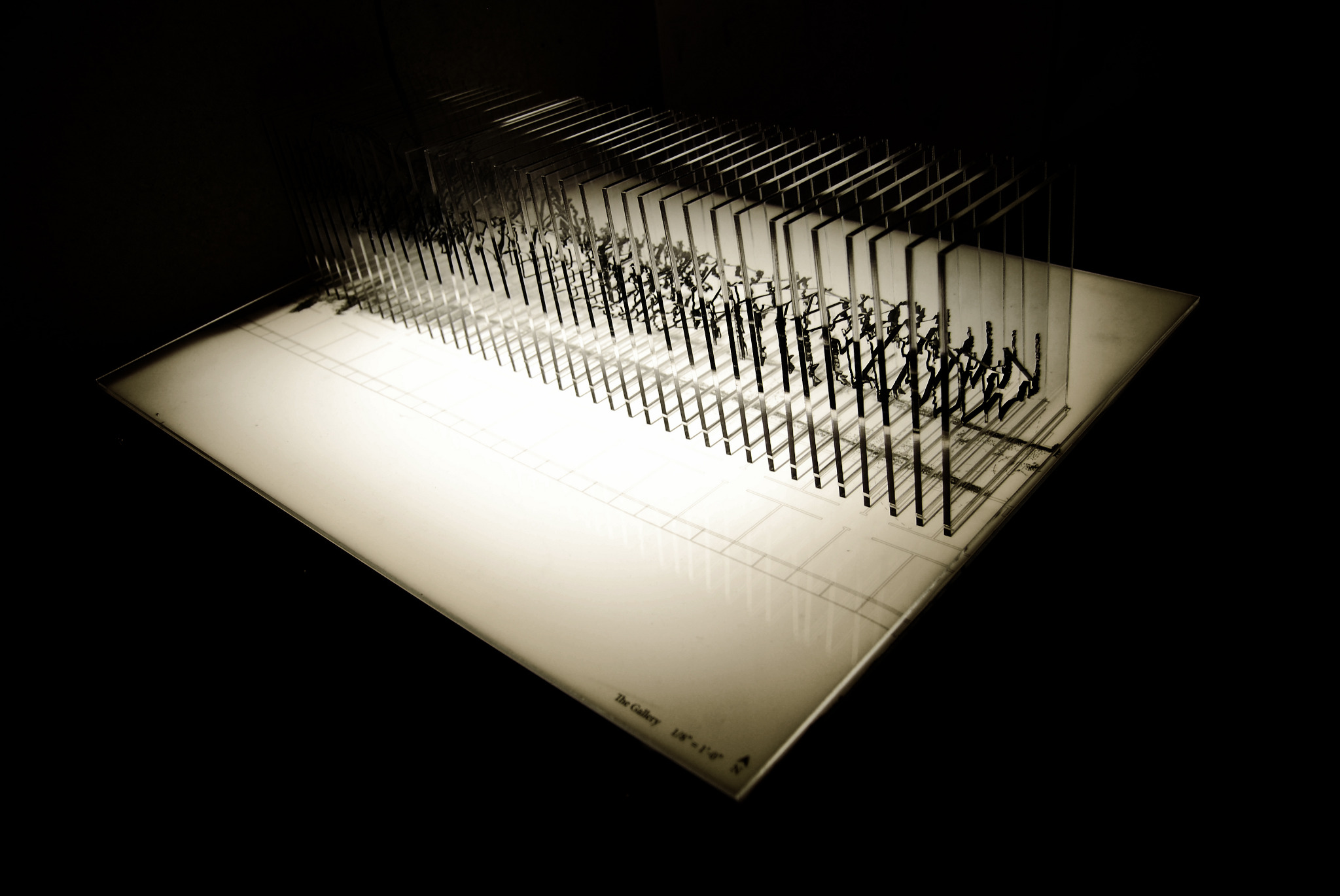 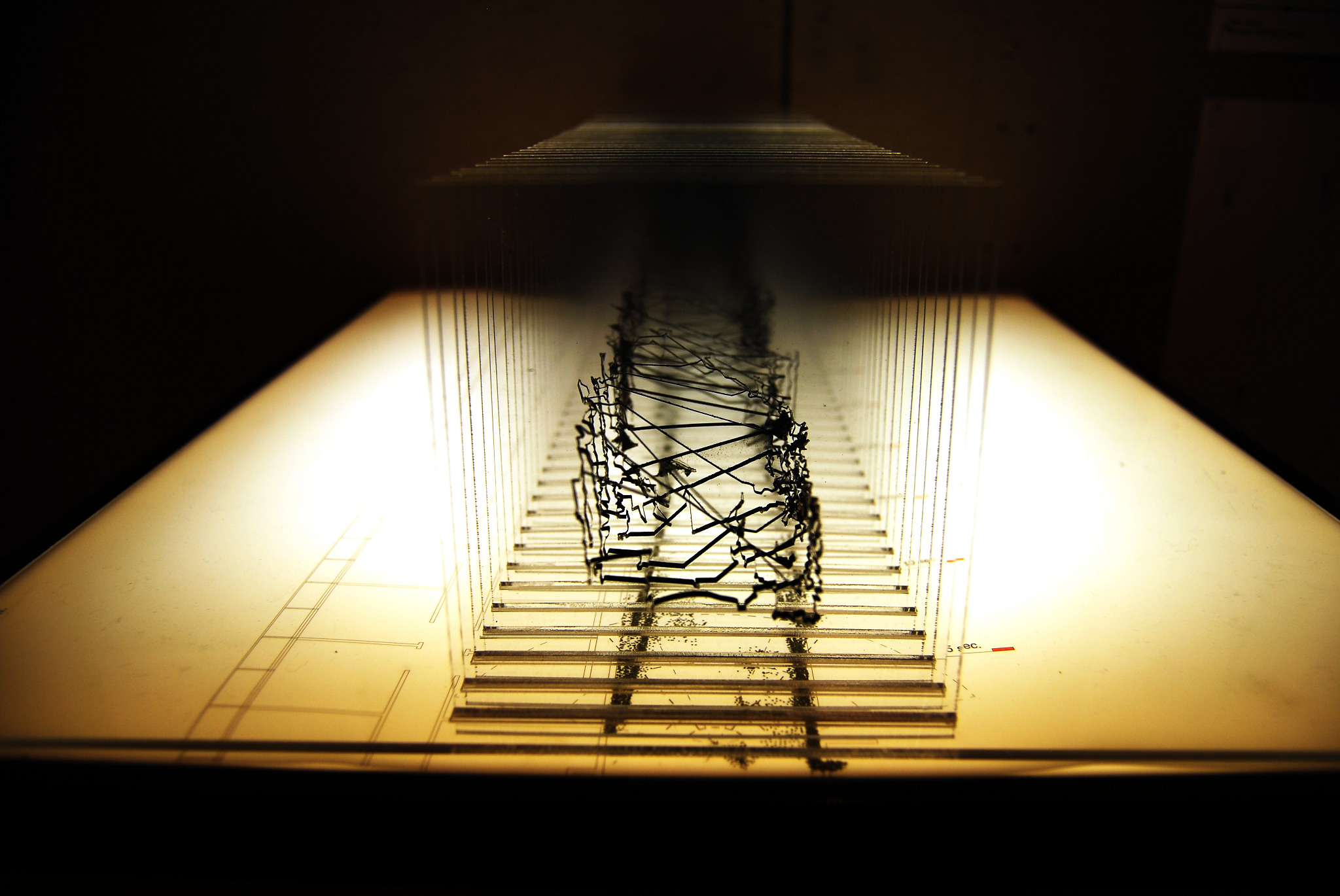 The project is a protagonist within the movement of spatializing conditions as atmospheric representations...

It is ambiguity and specific
It is relational
It is real
It is meaningless but meaningful
It operates through modes of vehicles
It crosses technological bearings
It is a permutation
It is a paradigm shift
It is within the discourse of spatial understanding and perception.
It is ...